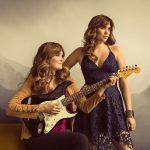 In 2019, The Belles finished an 82 city sold out arena tour of the US & Canada, as main support for Nickelodeon teen star JoJo Siwa, playing in front of over 500,000 people. Touring the UK followed in November, and Australia in January, as main support as well. This is the 7th largest grossing tour in the US in 2019. The ladies were to continue on the D.R.E.A.M. Tour for 52 more dates in the US & Canada, until coronavirus caused the tour to postpone until later in 2020. The Belles, a modern country mother daughter duo, are the perfect fit as support for JoJo Siwa, as many in the audience are moms and daughters. The duo was chosen by JoJo, AEG Presents, and Nickelodeon. Previous to this world tour, the duo had played over 300 gigs, including opening for Dan + Shay, Old Dominion, Brett Eldredge, Lee Brice, Eli Young Band and many others. The Belles released their new EP, “Nobody Knows Me Better,” co-writing 4 of the 5 songs, on 9/6/19, charting on the iTunes Country Charts. Produced by Grammy nominated Dave Brainard, their single “Beautiful Girl” debuted on Hollywood Life, and received play on CMT, Nickelodeon’s “Fresh Faces,” Sweety High, Pop Dust, Tiger Beat, Radio Disney Country’s “Let the Girls Play,” and Apple Music’s “New Country” playlist. With live performances on iHeartCounty YouTube Channel and Nickelodeon YouTube Channel, The Belles fan base has grown to 100K on all social media platforms.

There are no comments yet, add one below.